Myth – “Firearms must be thoroughly cleaned every time they’re fired and must never be stored dirty.”

Fact – Basic maintenance is simple and quick requiring little more than a wipe down and light lubrication.

This myth was a truism at one time. Many decades ago the priming mixture was corrosive and would line the bore with sediment that left unchecked would cause excessive rust and deterioration of the metal. Storing a weapon dirty after firing could destroy it. Some units maintained a 1:3 regimen, cleaning a rifle three times after each trip to the range.

A long time ago, back when corrosive primers were common issue, it was necessary to thoroughly clean three times after each use to prevent corrosion in storage. 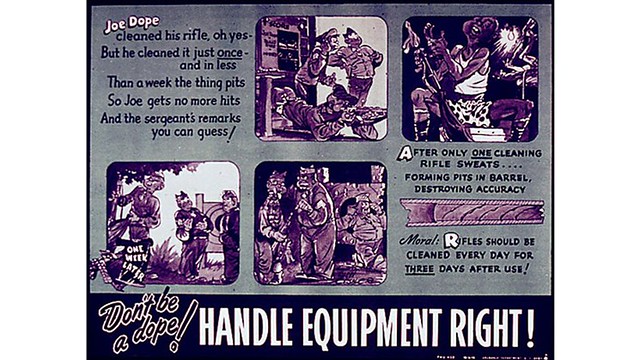 This is no longer the case and hasn’t been with ammuntion manufactured after World War Two.

However, since the introduction of non-corrosive primers after World War II this is no longer the case. Powder fouling (“carbon”) doesn’t harm a firearm and won’t cause problems unless left to build up to the point that it physically blocks or stops the mechanism. This rarely happens. For example, some gunsmiths recommend removing the bolt from the carrier of an AR15-series only if there is a problem, not for routine maintenance. Disassembly presented in the TM (Technical Manual) *-10 is the lowest level a basic operator can go if need be. That doesn’t mean you must disassemble that far every time.

Visit http://www.armalite.com and read “Technical Note 29, Rifle Cleaning.” ArmaLite, Inc., the company that initially released the AR15/M16 rifle, recommends a “detail cleaning” (complete field strip) once every 1000 rounds and a “combat cleaning” wipe down every 250 rounds. This will change based on environmental conditions, and the fact that Soldiers may carry a weapon daily but shoot it very little. At any rate, the inventors of the M16 insist that it is important to clean properly, not totally, and that most weapons are damaged by over cleaning them.

Most military weapons are damaged by improper and/or excessive cleaning. Most soldiers never shoot enough to wear a firearm out. Just clean it so it works.