Here are some choice quotes.

“Over the week long training period Soldiers fired thousands of rounds from the M-2 .50 caliber rifle……”

Yes, that is how they described this machine gun.

“The week consisted of Preliminary Marksmanship Instructions covering weapon systems so the Soldiers firing the weapons would feel comfortable to handle them properly.” One Soldier [whose name I’ve with held to protect the guilty] reported, “‘I thought the PMIs were well taught. “

The picture below, which was prominently displayed on the front page above the fold, was scanned from that article (this was on cheap newsprint, hence the poor scan quality.) I added the arrow which points to the Traverse and Elevation mechanism showing that it was mounted backwards. 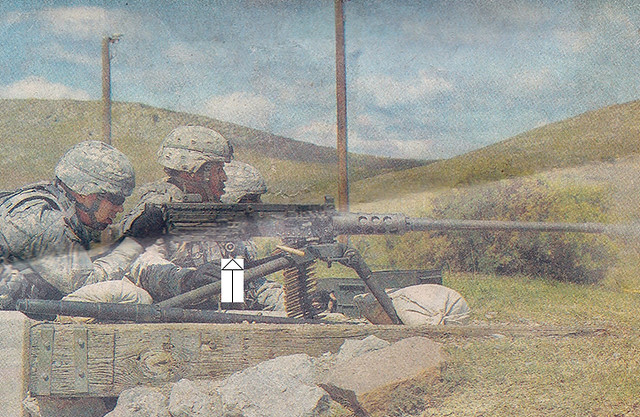 Note that the element I was assigned to at Fort Sill provided small arms instruction on a full-time basis but these active duty personnel never bothered to contact us. We found out about their little training event after the fact via this article.

Nothing was mentioned on how much skills were raised, or if they were even measured, in expending “thousands of rounds” through their M-2 “rifles” and backwards-mounted T&E.