Team Captain and firing member Lt. Col. David F. Schultz (Commander, 3/330th IN REGT, 4th BDE) said, “From the beginning of time Soldiers have been inextricably linked to their weapons system. So the bottom line is: Better marksmen make better Soldiers. And here at Fort Benning is where we put that philosophy to the test.”

The 95th Division Team successfully tested that philosophy with a number of notable finishes. Staff Sgts. Willis and Duthler won the first and second place High Drill Sergeant awards, respectively. SSG Willis was recruited to the 95th DIV by CSM Slee when he shot at All Army in 2013. SSG Willis is an August graduate of Drill Sergeant School and a member of the Army Reserve Marksmanship Program. “Shooting competitively for the USAR Marksmanship Program was the most important factor that improved my shooting knowledge and skill,” he said. “Now that I’m a Drill Sergeant I hope to spread this knowledge throughout the force.”

SSG Duthler’s second place finish among Drill Sergeants is worth mentioning as this event was his first marksmanship competition. “This is my first crack at competitive shooting. It’s very different when the stakes are high and you are competing against the best shooters in the Army,” he said.

CSM Slee, a successful, long-time competitive shooter was second in the overall Individual Army Service Pistol Competition and noted, “Leaders that send Soldiers to rifle matches understand the value of marksmanship and can likely hit a target themselves.”

As a team, the 95th Division was first place in the Infantry Team Match and Excellence In Competition Rifle Team Match, and finished third place overall in the All Army Service Rifle Team Champions.

In addition to leading this team for the 95th Division, Lt. Col. Schultz and Cmd. Sgt. Maj. Slee are also the OIC and NCOIC of the US Army Reserve Service Pistol Team. 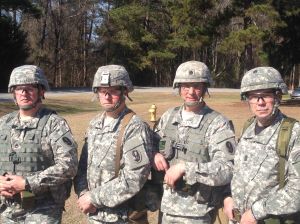