MAJ Luke Gosnell and his wife Ashleigh Gosnell arrived at New Hill, North Carolina, along with 96 other teams and what looked like it would be beautiful (although hot and muggy) weather. The 2-day match would consist of 8 stages, all involving teamwork, planning and, of course, some running. Unlike most competitions, coaching among teammates was welcomed and encouraged. During all 8 stages, one team member had to tag the other person before they could proceed to their intended targets. The shouts of encouragement from other squad members really got everyone pumped up, and perhaps even pushed the team members to run a little faster. They placed 37th as a team improving several positions higher than last years competition.

Recruiting Impact:
Each two-person team must include either a junior or female shooter. Yes, that meant many fathers were shooting alongside their sons, daughters, or wives. (During the morning shooters’ meeting, it was announced that a good divorce lawyer or marriage counselor would be recommended if necessary) Not the case here, because this was the Gosnell’s second time shooting this event.

USAR Combat Team Member MAJ Luke Gosnell placed 5th in the 3-Gun Nation Eastern Regional championship on June 18th. USAF marksmanship team and the newly formed USMC Reserve action shooting team were also in attendance. The match had a great mix of natural terrain and bay style stages to include a shoot house using rifle, pistol and shotgun targets. MAJ Gosnell’s performance in South Eastern, Southern and Eastern Regional 3GUN Nation Championships has earned him an invitation to the National Championship held in October at the Virginia International Raceway shooting complex. He may attend the Western Regional in St. George, Utah in September. 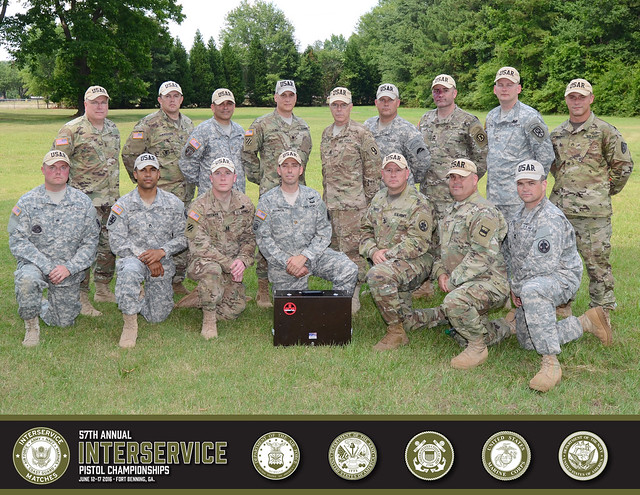 MSG Mango led with a perfect .22 Team NMC score of 300×19. SSG Rosene was the High Army Reservist with a 3479-141 in the Overall Individual Aggregate.

The sitting and prone rapid fire stages of the National Match Course were changed to a two and eight sequence when John Garand’s M1 became our issue service rifle. Given the design’s eight round en block clip, loading with eight is obviously no issue. Setting up two rounds can be accomplished without too much fuss by twisting the cartridges in a standard clip. Given this is done before record time begins, it may be fiddly but not a major hassle.

Here’s how to make this procedure easier:

It’s nice to see all the emphasis on M1 shooting and use in competition. One awkward aspect was loading for slow fire prone. Then I was given a “single shot clip.” What a wonderful assist!

The essence is a standard M1 clip is modified so that it can be inserted into an otherwise empty M1 receiver, where it remains due to a lip that catches on the side of the receiver “rail.” Then, with the bold locked to the rear, the follower in combination with the clip’s lips (R or L) will retain a cartridge just as would an M14 magazine.

To shoot, just push in a cartridge, and release the bolt in the identical fashion to an M14.

If you were an M1 shooter, you would understand what a blessing this is, especially in prone where inserting a cartridge is a pain (it will slip back out due to the muzzle being elevated), or tripping the bolt (just plain awkward in prone).

Speer didn’t oppose the use of more powerful weaponry to protect the plants, documents show. His concern was that officers get sufficient training to avoid missed shots and inadvertently creating larger problems, no matter which weapons they carried.

We sometimes joke about the poor marksmanship and spray-and-pray tactics of some police. But such conduct usually only poses a hazard to bystanders, other officers … oh, and sometimes the bad guy. But what if the recipient of these stray rounds was a functional nuclear power plant where release of radioactive materials, or even a core melt down could endanger hundreds of thousands?

That is the focus of the article linked below; it’s thought provoking.
http://www.ocregister.com/taxdollars/nuclear-715262-security-nrc.html

Interestingly enough, the “nationally recognized course” referred to for their qualification is a 100 yard National Match Course (the NRA High Power rule book is explicitly mentioned as a part of their standard qualification) and NRA PPC with B-27 targets for pistol.