USAR Combat Team member 1LT Curtis Brotherston competed in the Precision Tactical 2-Rifle Championship in Raton, New Mexico on 8-9 July 2017 using both a precision bolt-action rifle and a tactical carbine while engaging targets out to 1000 yards. Curtis and other competitors engaged targets between various shooting positions while carrying all equipment used such as wind meters, binoculars, range finders, support bags in a pack while on the move with their rifles. Each stage of fire required the shooter to engage five long range rifle targets from 400 to 1000, while a various amount of carbine targets were engaged from arms length to 400 yards. Each shooting challenge was unique requiring the shooter to engage targets in unknown positions such as standing, over and under obstacles such as vehicles and through windows. Curtis is the first USAR-CMP member to attend a PRS match of this style and he placed a respectful 15th place among some world class athletes attendance. Match directors JJ and Denise Johnson are seasoned facilitators who always welcome military service members at all of their matches.  More information can be found on their webpage. 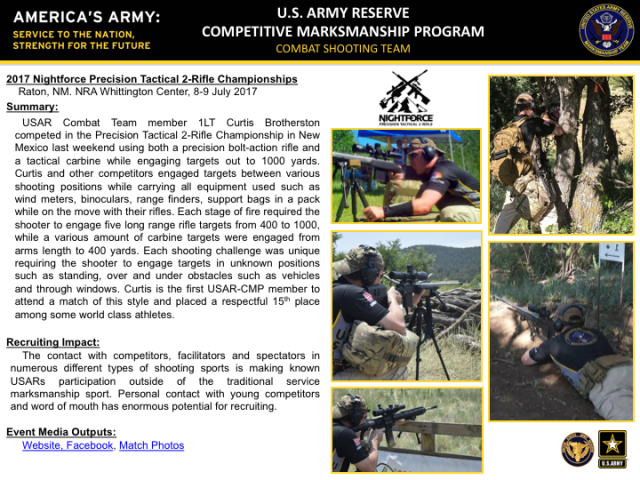 The contact with competitors, facilitators and spectators in numerous different types of shooting sports is making known USARs participation outside of the traditional service marksmanship sport. Personal contact with young competitors and word of mouth has enormous potential for recruiting.