Fort Bragg, NC – Soldiers from various units compete in the FORSCOM Small Arms Competition hosted by the 82nd Airborne Division on Fort Bragg, North Carolina. Throughout the fourth week of October 2017, three groups of competitors test their abilities in using one of three small arms weapons, the M249 Saw, Pistol and M4 Carbine.

Members of the USAR CMP provided support and conducted the Excellence In Competition portion of the event. 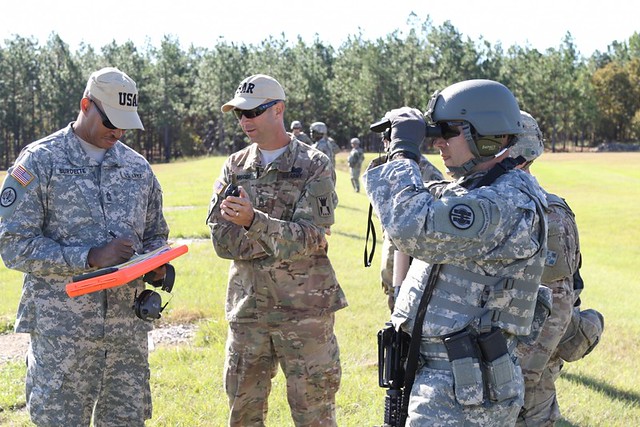 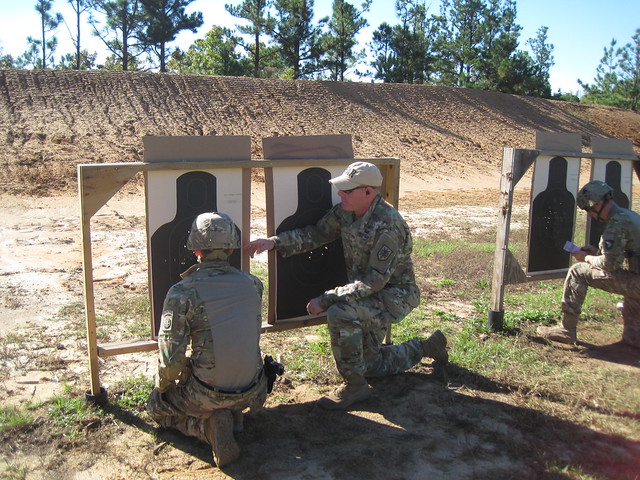 WO2 Knote helps a competitor during the Pistol EIC. 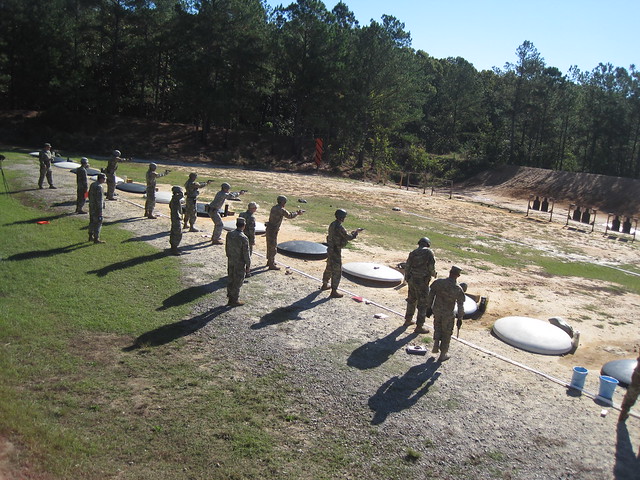 Some remarks respecting the training of a raw countryman, or a mechanic from Birmingham, perfectly awkward and generally very ignorant.  He is consigned to the superintendence of the drill serjeant.  He is first taught to walk, next to march, and hold himself tolerably erect.

Then a firelock is placed in his hands, which he handles at first as awkwardly as a bear would a plumb cake.  When he is taught the manual exercise and fit to do regimental duty, they then take him to fire powder.  Whilst the drill serjeant is teaching him to fire either by files or by platoons, the serjeant says to him, laying his cane along the barrels of the firelocks, ‘Lower the muzzles of your pieces, my lads, otherwise when you come into action, you will fire over the enemy.’

After this the recruit is taken to fire ball at a target.  How is he taught?  Thus he is spoken to:  ‘Take steady aim, my lad, at the bull’s eye of the target; hold your piece fast to the shoulder that it may not hurt you in the recoil; when you get your sight, pull smartly.’  This is the general way in which I believe they are taught, and in the name of truth and common sense permit me to ask you how a drill serjeant who is no marksman himself can teach an ignorant countryman or a low order of a mechanic to be a good marksman.  In my humble opinion, excellent in their way as they are to discipline the soldier and form him for parade and actual service in the line, the serjeant is just as capable of teaching him how to solve one of Sir Isaac Newton’s problems as to teach him to be a marksman.

Reflections on the menaced invasion, and the means of protecting the capital
Lord George Hanger, 4th Baron Coleraine
London, 1804

This group from the 1930s sure knows how to shoot in style. Looks like it was a beautiful day to be shooting at the range. #throwbackthursday #tbt #wheelgun #sunsoutgunsout #1930sstyle

This is almost the same as today as back in the 1930s. The basic format has followed the pistol National Match Course. Read
A Short History Of The National Trophy Individual Pistol Match by Hap Rocketto