The Army Reserve Marksmanship program held an invitational training, new event and equipment testing, and competition at Marine Corps Base Quantico March 18-23. Their emphasis was to prepare for upcoming competitions, such as the Army Forces Skill At Arms Meeting, an international Service Conditions event.

“Sgt. 1st Class Horner trained us during the event and it was great,” said Lt. Col. Scott Klawon of the 97th Training Brigade (100 Division), the officer in charge of the Service Conditions team and of the training event. “He is a professional shooter and coach and helped each person there. He was especially instrumental in close range speed shooting which our team has less expertise on.”

The event also featured testing new training events for the entire Army Reserve and equipment. “We had a chance to test a variety of equipment, both Army issue and other items of interest,” said Sgt. Maj. Raul Torres, the event noncommissioned officer in charge. “Getting feedback from skilled shooters on a marksmanship program rather than randomly-selected Soldiers is ideal.”

As with most Marksmanship Program events, the training culminates with scored competitive events. Soldiers on the team have to produce good scores in order to demonstrate skills as superior small arms trainers and to be effective Team members. Sgt. 1st Class Sean Morris 83D MP Company under the 200th MP Command was the highest scoring Soldier at the event. He as also the first place Rifle shooter. Sgt. Devin Hughes of the 450th Civil Affairs Battalion (Airborne) under the 352nd Civil Affairs Command was the first place Pistol shooter. 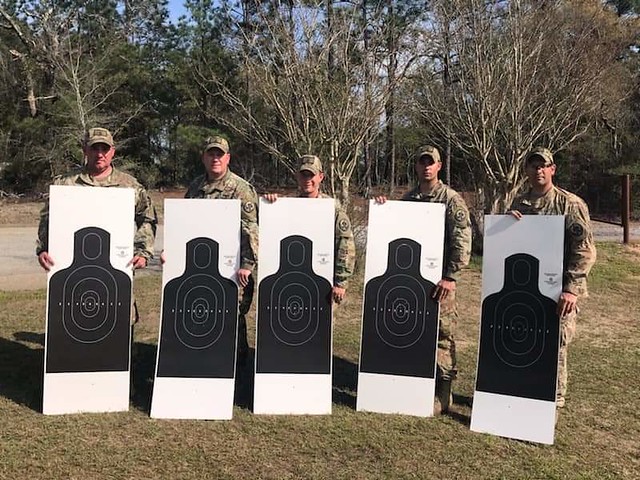 “This fund will provide a means to create and further perpetuate the concept of female firearms instructors who in turn will bring more women into the shooting sports and personal defense arenas in the United States and around the world,” George Harris said. “The program will start by selecting a well deserving applicant to an all expenses paid class appropriate for their level of expertise. Initially, this will be self-funded by USCCA but will expand with industry support in the interest of bringing more women into the world of safe and successful use of firearms.”

Linda Harris, who passed away at age 68 on September 1, 2018, was well known in the firearms community as an outstanding instructor who dedicated herself and her career to training people to defend themselves and to encouraging women to get involved in the shooting sports. After George Harris co-founded the SIGARMS Academy, Linda joined on as the first female firearms instructor in the history of the company, teaching a variety of firearms-related subjects to men and women alike. She often instructed military personnel with her husband and performed range duties at Quantico and Fort Benning during matches. Often referred to as “The Boss Lady” by Soldiers and shooting team members that worked with, Linda held a command for respect that was immediate by all who knew her. After officially retiring in 2011, she continued teaching women in the proper use and safe handling of firearms for sporting and defensive use.

Applicants can begin by visiting the Linda Harris Memorial Scholarship website for additional information. All female firearms instructors, especially those in the Army Reserve, are encouraged to apply.

“No greater tribute could Linda have but to be able to have the work she was so passionate about carried on in her name with the same passion and effort that she exhibited,” George Harris said. “Pass this along and become a part of this movement to bring more women into our efforts to keep firearms as part of our heritage.”