Army Reserve Soldiers compete with the best shooters in all branches and components of our military at the 60th Annual Interservice Pistol Championship.

Soldiers represented the Army Reserve competed at the 60th Annual Interservice Pistol Championship. Hosted and conducted by the U.S. Army Marksmanship Unit (USAMU) June 16-21 on Phillips Range, Fort Benning, the Interservice Pistol Championship is a Precision Pistol open to all United States military personnel with teams representing the Active and Reserve components of all the services.

Precision Pistol is a conventional competition discipline requiring shooters to engage targets at 50 yards with individual shots and at 25 yards in Timed and Rapid fire engagements. At 50 yards, the black circular aim point (bullseye) is about the size of the head area on an E-type silhouette with several interior scoring rings, the ten-ring spanning about six minutes of angle which is the same width as a 300-meter silhouette target engaged during qualification. All shooting in Precision Pistol is unsupported and with one hand.

As a team, USAR Black was first place among the Reserve component teams and second place overall behind the AMU. USAR Black took second place in the .22 and Service Pistol team matches and third in the .45.

Maj. Michelle Lunato, AMU Public Affairs, has a photo album of the event: 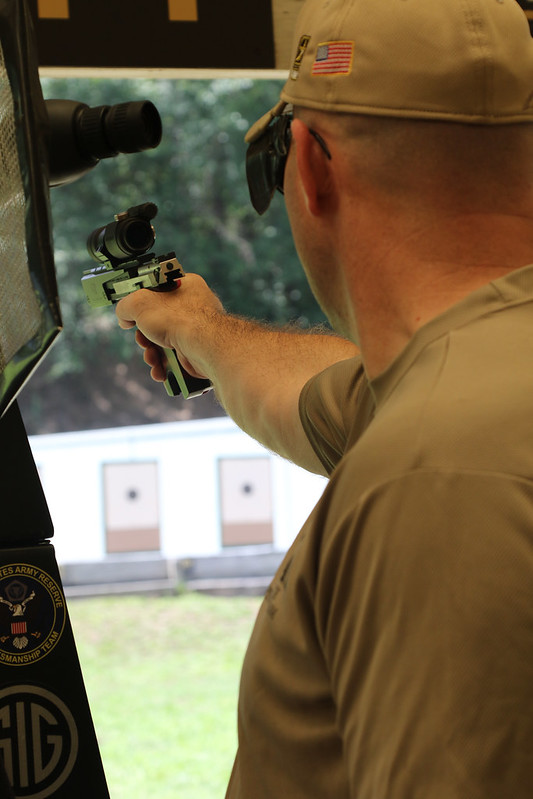