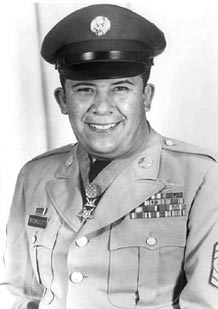 He was an automatic rifleman when his unit attacked the strongly defended Paco Railroad Station during the battle for Manila, Philippines. While making a frontal assault across an open field; his platoon was halted 100 yards from the station by intense enemy fire.

On his own initiative, he left the platoon, accompanied by a comrade, and continued forward to a house 60 yards from the objective. Although under constant enemy observation, the 2 men remained in this position for an hour; firing at targets of opportunity, killing more than 35 hostile soldiers and wounding many more.

Moving closer to the station and discovering a group of Japanese replacements attempting to reach pillboxes, they opened heavy fire, killed more than 40 and stopped all subsequent attempts to man the emplacements. Enemy fire became more intense as they advanced to within 20 yards of the station.

Then, covered by his companion, Pvt. Rodríguez boldly moved up to the building and threw 5 grenades through a doorway killing 7 Japanese, destroying a 20-mm. gun and wrecking a heavy machinegun. With their ammunition running low, the 2 men started to return to the American lines, alternately providing covering fire for each other’s withdrawal.. In 2 l/2 hours of fierce fighting the intrepid team killed more than 82 Japanese, completely disorganized their defense, and paved the way for the subsequent overwhelming defeat of the enemy at this strongpoint.

Two days later, Pvt. Rodríguez again enabled his comrades to advance, when he single-handedly killed 6 Japanese and destroyed a well-placed 20-mm. gun by his outstanding skill with his weapons, gallant determination to destroy the enemy, and heroic courage in the face of tremendous odds. Pvt. Rodriguez, on 2 occasions, materially aided the advance of our troops in Manila.

A rifle firing range at Ohio National Guard Training Site, Camp Perry, Ohio has been named in honor of Pvt Rodriguez. Camp Perry is the home of the National Rifle and Pistol Championships.