All U.S. Army Reserve Soldiers and units are subject to this change, which will push us toward the training intent set by Chief, Army Reserve LTG Charles D Luckey and Army Reserve CSM Ted Copeland.

Overview of the new Rifle/Carbine Qualification:

The Small Arms Training Academy (SATA) at Fort McCoy is conducting a Proof of Principle class for small arms training coursework on 16 to 29 June. The class still has slots available and any Army Reserve unit with one or two Soldiers that would fit the role of a small arms trainer has time to apply.

A Unit Weapons Subject Matter Expert is proficient in all current small arms, optics, and accessories and can conduct Preliminary Marksmanship Instruction and Evaluation on all weapons systems, has a thorough understanding of maintenance, can conduct training, ranges, and qualifications in accordance with the current, prescribed Training Circulars, and assists the Commander with developing a solid year-round training calendar.

“Gunnery is an on-demand skill, there is no time for practice in combat,” said Master Sgt. Howard W. Griffith. “In addition to being the Course Manager for SATA, I am the Task Force Cold Steel Standardization NCOIC. Our mission is to train Unit Subject Matter Experts on weapons and optics.” 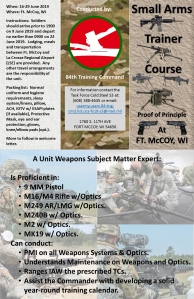 Marksmanship programs have been the longest-serving and most equal opportunity compliant readiness resource in history.

Equal Opportunity programs are intended to direct and sustain a comprehensive effort to maximize human potential and to ensure fair treatment for all persons based solely on merit, fitness, and capability in support of readiness. The goals of the EO program are to provide equal opportunities and fair treatment for personnel without regard to race, color, gender, religion, national origin, and provide an environment free of unlawful discrimination.

The Army has long been a proponent of Equal Opportunity programs, often as an early adopter that is used as a model for other government agencies and businesses. No other readiness component in the Army has been offering equal opportunities for Soldiers longer than the marksmanship programs. Shooting programs removed barriers to race and gender decades before it was mainstream and long before the Army officially enacted a formal Equal Opportunity policy.

Cpt. Margaret Thompson Murdock was the first woman to win a medal in Shooting at the Summer Olympics and the first to win an individual open World Shooting Championship. In international competition, Murdock set four individual world records and nine team world records. She is a member of five halls of fame, including the USA Shooting Hall of Fame and the Kansas Sports Hall of Fame.

Cpt. Murdock started competing while attending college in Kansas. “My first year at K-State, I couldn’t shoot on the team because I was a female,” she says. “I could practice with the K-State team but I couldn’t be on the team. They got a new coach and he thought it would be a good idea for me to be on the team since I was shooting better than everyone else.”

As the US International Rifle Team captain, Cpt. Lanny Bassham entered the 1976 Olympics as the reigning World Champion and had took silver in the 1972 Olympics. At the ’76 Olympics Murdock tied for first place with Bassham. Bassham requested a shoot-off, even though this wasn’t allowed by current rules. Instead, judges were forced to break the tie of the 1200 point match. Murdock appealed for a second review of her targets. The two Americans sat together and waited. Bassham noted while the judges re-tallied scores, “I looked at her and said, ‘If this comes out a tie, it will be totally arbitrary that I beat you.’ ”

Both marksmen had experience with the rule. Because of it, Bassham had lost the 1974 world air-rifle championship, and Murdock had won her place on the Olympic team, after tying with John Writer in the Trials. “It has nothing to do with skill,” she said. “It’s just to save the officials the bother of a shoot-off.” Thus when the review Murdock had requested failed to break the tie, she and Bassham asked the International Olympic Committee whether two gold medals could be given but was denied. “I can’t be upset at any individual.” Bassham said. “Everything was done by the book. There was no discrimination against Margaret because she was a woman. Not here. If anyone is at fault it is me for not trying to change the tie-breaking rule in 1974.”

During the national anthem, Bassham pulled Murdock up to stand with him on the gold medal spot at the podium to share the victory platform with him as the flag was raised and the anthem played and the two stood together. “I wanted to show that I felt her performance had equaled mine,” said Bassham. “It was not an act of defiance but a personal thing. There was no way she deserved to stand lower while the national anthem was played.”
http://cjonline.com/sports/2011-08-26/no-5-murdock-didnt-miss-upon-getting-her-shot

In 2010, Army marksman Sherri Jo Gallagher was the second woman in history to be crowned the U.S. National High Power Champion, posting a record-breaking score of 2396-161x out of 2400 that still stands as the highest score ever posted at this event. She took eight of the twelve match trophies that make up the annual national championship and bested the previous record of 2389-138x set by High Power legend David Tubb in 2003. In addition, she also won the 2003 ICFRA Worlds long range match at Bisley.

Sergeant Gallagher comes from a family of shooters and has had a rifle in her hands since she was young. Her mother, Nancy Tompkins-Gallagher, is a previous High Power Rifle champion, the first woman to do so, winning the national championship in 1998. Nancy also won the famed Wimbledon Cup in 1993. Sister Michelle Gallagher has won the Wimbledon Cup five times, her first time at age 16, as well as the overall Long Range Championship. By comparison, famed Marine sniper Carlos Hathcock “only” won the Cup once.
https://en.wikipedia.org/wiki/Wimbledon_Cup

Preparing for Camp Perry and other matches falls in line well with what all members of the Army Marksmanship Programs do. “We spend most of our time in the off season training up soldiers,” Sgt. Gallagher said.

Equal opportunity polices demand treating all personnel and others without discrimination, especially on the basis of their sex, race, or age. In addition to being a critical skill for Soldier readiness, marksmanship programs have been creating equal opportunities decades before EO programs were formalized.

Note how often that competition was suggested as a good approach to training.

This film covers rifle firing skills.
– Reel 1 provides an introduction to methods of estimating range to target.
– Reel 2 shows how unit members communicated knowledge of the target in the field.
– Reel 3 instructs squad leaders on the construction and use of ranges for landscape target firing.
– Reel 4 details technical characteristics of rifle fire and its effects.
– Reel 5 demonstrates the application of rifle firing techniques in field exercises.
– Reel 6 features a schematic drawing of the effect of combat fire.

I made this POI when I was the Chief Marksmanship Instructor for USMC base Hawaii.  The notes are my own words and are very specific and correct.  Since I made this, I’ve taught it to 8-10 Squad Designated Marksman courses from 2007-2010.  The success of my students in theatre was so apparent that TECOM has made most verbiage of my (this) class USMC doctrine.  I recommend you play the slideshow on one computer (for animation) and follow along with the notes on another or a printout.  I would take the 15-20 minutes to review my wording and pay attention to detail while learning it.  Please excuse any grammar mistakes.

I send this to you all because It literally took me 8 yrs (of winning) until the “light” turned on for me, in the specific fundamental of aiming.  I hope it helps one of you.

I realize some topics in the POI could be considered “theory”.  I am not perfect but I strive for excellence.  If you find something questionable, please feel free to tell me about it.  I always want to improve my repertoire.