“Were you able to see, through the scope mounted on your rifle, why we were telling you what to do?” asked Master Sgt. Norman Anderson, a member of the Army Reserve Marksmanship team.

“Hooah!” came the response from the soldiers.

“When you did the practice yourself, you were able to implement and have success. Yes or no?” he asked.

“Yes!” was the unanimous response from the group.

The question and answer session was a small part of the training for soldiers from the 2nd/504th PIR on the Enhanced Battle Rifle – an individual weapon system that will be used by the unit’s squad designated marksmen during their deployment to Afghanistan.

The Army Reserve Marksmanship team was contacted by 2nd/504th PIR leadership to conduct squad designated marksmanship training on the EBR, according to Master Sgt. Richard R. Kalina II, who was in charge of the training event.

“Any time we have a chance to enhance the skill of the warfighter directly … that’s a privilege,” Kalina said. “You can’t place a value on that type of experience.”

Kalina said that many of the trainers have been with the team for many years and have valuable experience to share.

“Being able to impart the knowledge that we have to our next generation, that is going to firmly implant on their minds,” he said. “In turn, when they make the option to either stay with the Army or go to the Army Reserve or National Guard, they’re going to think back to the training they have received right now and they’re going to do the same for the next generation.”

The EBR itself is not completely new but a modification of the M14 service rifle, said Staff Sgt. John Arcularius, the non-commissioned officer in charge of the Army Reserve Service Pistol Team.

“The best thing we can give them is confidence in their weapon’s ability to hit at those extended ranges we expect it to hit,” he said.

Arcularius said the training is broken down into five phases to include: position evaluation; dry fire; range estimation; elevation, windage and hold off-hold on; and field fire qualification.

“In the beginning of it, we are training them. As we progress, we are actually teaching them how to train themselves and how to sustain their training so when we go away they can still keep confidence and competence to keep a sustained force,” he said.

They provided “very, very good teaching points,” Tyree said. “They really relate the training to how we are going to use it when we get down range.”

Tyree, who deployed to Iraq twice, said the training was definitely a confidence builder for him and his fellow airborne soldiers.

“Hands down, this is some of the best training I’ve had in the last couple of years,” he said. 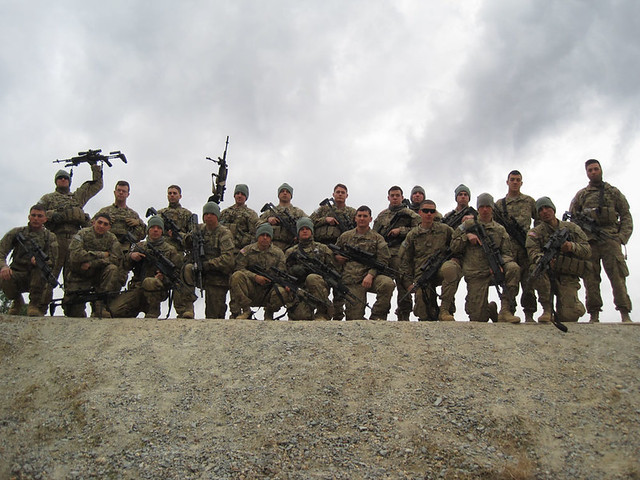